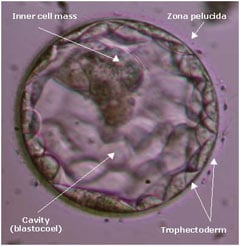 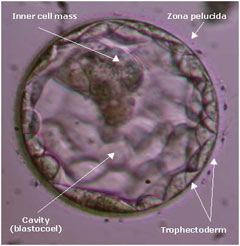 If you're undergoing or researching IVF, you may have learned that not all embryos are able to implant, and therefore sometimes the decision is made not to transfer an embryo to the patient after an analysis is performed. The analysis used to make that determination is called blastocyst grading. What exactly is the embryology lab looking for when they perform blastocyst grading?

How a blastocyst is formed

First let's define a blastocyst. In the IVF process, after eggs are retrieved by the physician, they go to the embryology lab. There, the eggs are fertilized by the sperm and the fertilized eggs (embryos) are further cultured. The embryos divide over the next few days and have a typical appearance as they progress. Approximately 5 days after retrieval, the embryos reach what is called as the blastocyst stage.

The embryologist will typically tell the patient that a blastocyst has received a grade consisting of a number and two letters, for example: 4AA. 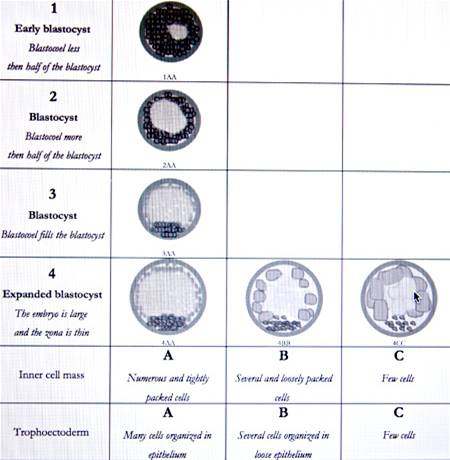 The number explains the degree of embryo expansion of the blastocyst cavity and its progress in hatching out of the zona pellucida on a scale from 1-6; as the embryo expands, the degree of expansion increases. The first letter indicates on a scale from A to C (A being the highest) the quality of the inner cell mass, which potentially becomes the cells that form the body of the embryo after implantation.

The second letter is also on a scale from A to C (A being the highest), and this grade indicates the quality of the trophectoderm, the cells that give rise to the placenta and extraembryonic tissues after implantation. Implantation is the process of the human blastocyst attachment to the luminal epithelium of the uterus within six to eight days after fertilization.

What is the 'perfect' blastocyst grading score?

While morphology is an important factor, do not panic if your blastocyst is not “perfect” quality! Many pregnancies do occur from AB or BB quality embryos; however, embryos with CC quality are considered non-viable and are not transferred.