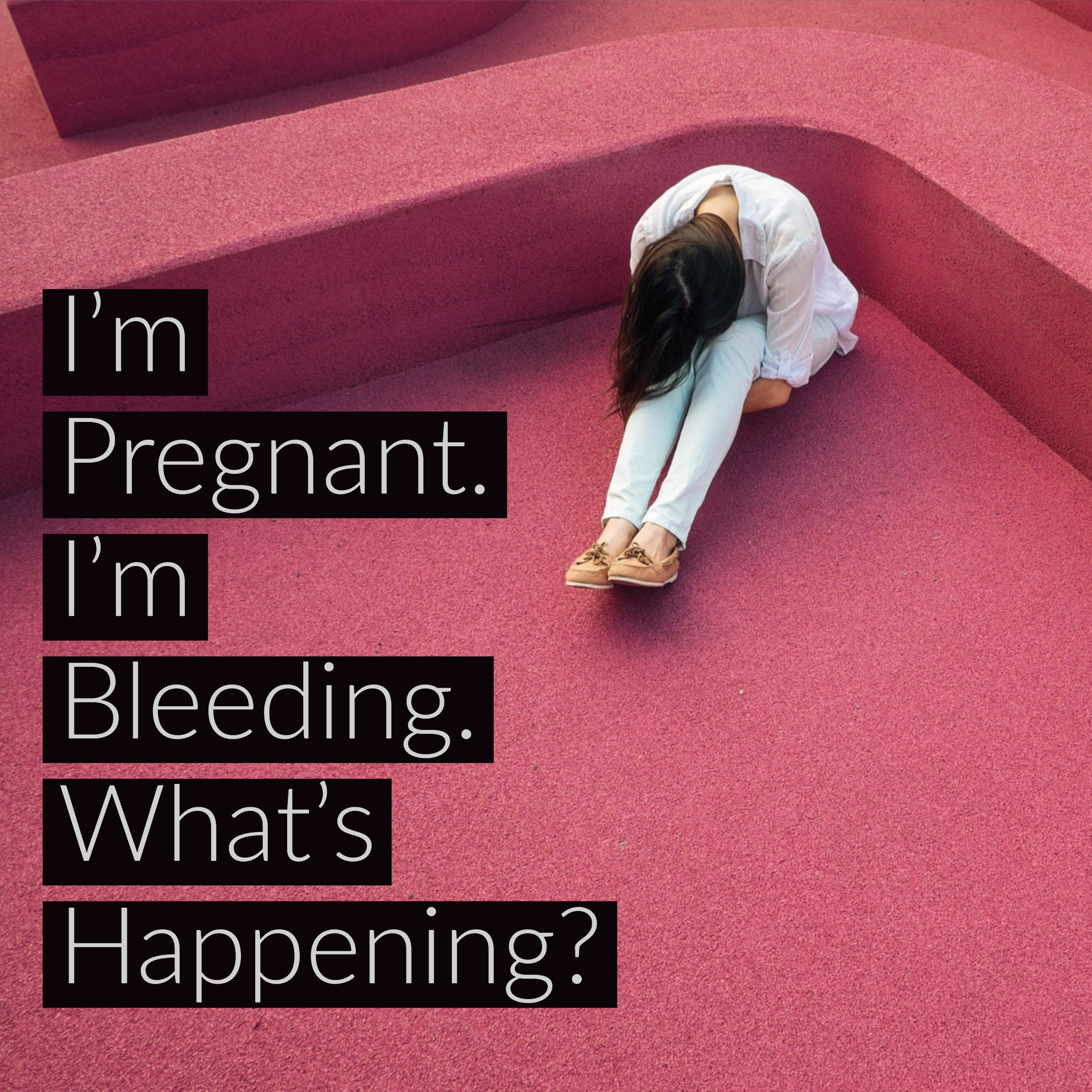 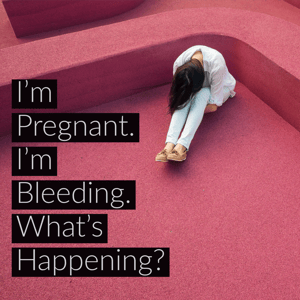 Bleeding during pregnancy is scary, particularly when you have been trying to get pregnant for a long time with the help of a fertility specialist. In this post, I’m going to look at different reasons why bleeding happens during early pregnancy—including reasons that DON’T involve miscarriage.

Please note that if you’re very worried about bleeding, especially heavy bleeding accompanied by pain, cramps, or clots, you should call your physician first and follow his or her advice.

It’s Not Always a Miscarriage

Our first response when bleeding occurs in this very much-desired pregnancy is “Oh no! I must be miscarrying!” “What did I do wrong?” “Why is this happening to me?”  Well, I am going to tell you to STOP this negative talk to yourself. It is unlikely that you did anything wrong.  Yes, it is certainly scary. Yes, it could be the first sign of a miscarriage. But we also see bleeding in many pregnancies that continue to term. In fact, it is very common to have some bleeding during pregnancy. About 27% of all pregnancies have some bleeding without an immediate miscarriage.

So that is a lot of pregnant women who experience bleeding and not all result in miscarriage. Most do not miscarry. About 15% of all pregnancies will miscarry. This percentage does go up as women age—to about 35% in women in their early 40’s. 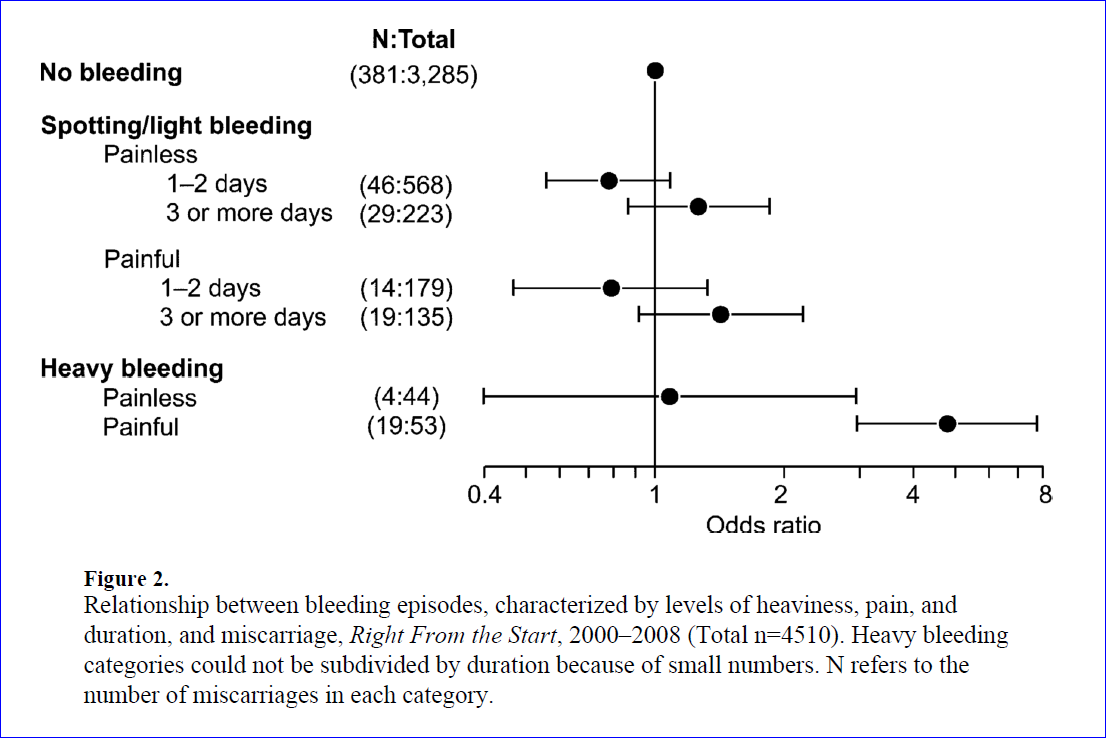 Bleeding from a hemorrhoid may be light or can be heavier, depending on the inflammation of the hemorrhoid. This type of bleeding may resolve on its own, after some pressure is applied, or it may need some treatment to resolve (a stool softener, Preparation H, steroid cream, or other treatment).

Bleeding may also come from an infection in the vagina or the bladder. If the patient has a vaginal infection (very common ones include yeast infections or bacterial vaginitis—“BV”) or vaginal/vulvar warts, these problems may result in bleeding during pregnancy. Treatment will resolve these issues. A bad bladder infection or inflammation of the bladder (cystitis) may result in bloody urine that can be confused with pregnancy-related bleeding.

However, if there is an infection, the bleeding may be accompanied by burning on urination. This infection or cystitis will need to be treated with antibiotics that are safe to use during pregnancy (your physician and pharmacist will be able to help prescribe appropriate medication). Once treated this bleeding should stop.

Bleeding from the (Thinner and More Delicate) Cervix

Bleeding may occur from the cervix which is the portion of the uterus where it opens into the vagina. Bleeding may occur on tissue or may discolor the water in the toilet bowl when urinating and still be coming from the cervical bleeding. This type of bleeding may be noticed after a transvaginal ultrasound, after a pap smear, or after intercourse because the cervix may be bumped during these activities and the cervix is more sensitive during pregnancy.

So when women walk, have intercourse, a pap smear, or a transvaginal ultrasound, the cervix may be “bumped” where these thinner layer cells are present and result in bleeding. This type of bleeding usually resolves on its own unless the patient is taking a blood thinner or an aspirin product which interfere with the blood being able to clot well on its own.

Sometimes there is bleeding coming from a portion of the pregnancy when a small area of the gestational sac pulls away from the uterus with some bleeding behind it. This bleeding may track down to the cervix and come out. This area may be seen on ultrasound and it is called a subchorionic bleed---which I will discuss in another blog. These too can be fairly prevalent and most resolve without a problem during pregnancy.

Bleeding may occur and resolve without us finding a reason for the bleeding. In these situations, we often watch the pregnancy a little closer with more frequent ultrasounds to confirm that the baby is growing appropriately and to give the mother and physician reassurance.

When to Worry: Bleeding with Clots, Cramps, and Severe Pain

Lastly, bleeding can represent signs of a miscarriage or a pregnancy that has implanted in the wrong location (known as an ectopic pregnancy). Worrisome bleeding is bleeding that is heavy with passage of clots and/or accompanied by cramps and pain.

Most miscarriages occur due to a genetic abnormality within the embryo or fetus.  If this is the case, then the miscarriage will be inevitable, and we will not be able to stop it. Ectopic pregnancies may also be accompanied by symptoms of abnormal bleeding and/or pain on one side. This problem if caught early can be treated medically, but it can also become a potentially life-threatening emergency.

If you are bleeding heavily—to the point where you are light-headed or soaking more than one pad per hour—you need to go to the emergency room.

Many Causes of Bleeding During Pregnancy

I hope you come away from this post better informed about a few of the reasons you may experience bleeding during pregnancy—not all of which are related to a potential miscarriage. Again, whenever you experience vaginal bleeding, you should contact your physician immediately and follow their instructions!

It is always better to be safe than sorry, and it’s perfectly reasonable to feel anxious about your pregnancy—especially one that follows after miscarriage or loss. We are here to help.

Dr. Elizabeth Puscheck is a nationally recognized Reproductive Endocrinology and Infertility (REI) specialist and board certified in both REI and Obstetrics and Gynecology. Her expertise expands beyond these areas to include gynecologic ultrasound where she has been active in writing/revising the national practice guidelines. In addition she has taught numerous symposia and workshops throughout the country for American Society of Reproductive Medicine, American Institute of Ultrasound in Medicine and the American College of Obstetrics and Gynecology and authored over 100 manuscripts, reviews, chapters, and books. She is active in a number of clinical trials regarding new drugs and devices dedicated to improve our medical care. Her passions include providing the best clinical care for her infertility patients. She is proud to be a member of the InVia Fertility Specialists team, and is ready to work with parents of all backgrounds to achieve a healthy pregnancy.

What is a Good First hCG Level after Embryo Transfer?

Pregnancy Test After IVF is Positive! What’s Next?

How accurate is a home pregnancy test with IVF?

Bleeding During IVF - What's Normal and What Isn't?