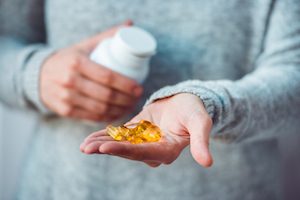 Recent studies have suggested a relationship between the diet of both partners and fertility, including the impact of obesity. Dietary supplements for fertility are one of a number of things that people incorporate into their lifestyle to increase chances of pregnancy.

Here is a list of dietary supplements that may increase your fertility. In particular, the roles of antioxidants, omega – 3 fatty acids, and co-enzyme Q-10 will be discussed in detail.

As women get older, the amount of antioxidant in the fluid around the egg decreases. Without antioxidant protection, the cells surrounding the egg are less able to provide nutrition for the egg as it matures. The resulting poor function of those cells correlates with reduced embryo quality and the chance of pregnancy (Suh, 2002, Elgindy, 2008).

For men, oxidative stress increases and the level of antioxidants in semen decreases with age. Sperm are very sensitive to oxidation because they have to shed their cytoplasm in order to be able to move rapidly. Antioxidants can improve the health and viability of sperm by protecting them from the damaging effects of oxidation products (Shamsi, 2009).

Particularly for men, Vitamin C (Ester-C) is a recommended antioxidant. A daily 500 mg dose of Ester-C lasts for up to 24 hours, which is longer than regular Vitamin C. In addition, Ester-C is non-acidic and gentle on your stomach.

Omega-3s are also important in the make-up of sperm membranes. In various recent studies, fish intake (Afeiche, 2014), and omega-3’s have been associated with improved sperm quality (Chavarro, 2009, Safarinejad, 2011, Attaman, 2012).

An easy and inexpensive way to get omega-3’s is from fish oil. A reasonable dose is 500 to 1,000 mg daily, but make sure that is the amount of EPA and DHA (the two principal omega-3’s) and not just the amount of oil. They are listed on the nutrition label on the back of the bottle.

Co-enzyme Q-10 is critical to energy production in the cell. A Canadian team has done some intriguing studies on egg quality in the aging rat (the older female rat’s eggs show very similar changes compared to eggs from older women), and most of those changes were reversed with co-enzyme Q-10 (Ben-Meir, 2015).

As yet there is only a small study in humans (Bentov, 2014). However, there were strong trends toward a lower rate of chromosome abnormality (47 vs 63%) and higher clinical pregnancy (33 vs 27%). In men given 200 mg of CoQ10 twice daily, the percentage of sperm with forward movement and the average sperm velocity were significantly increased (Balercia 2004).

CoQ10 is available in both tablet and liquid form. Talk to your doctor about proper dosage. If you do take CoQ10, you should stop it with a positive pregnancy test.

Of course, good nutrition is always important, but knowing that it may improve your fertility is an added bonus!

To see a fertility specialist with excellent success rates and state of the art technology, make an appointment at one of InVia’s four Chicago area fertility clinics.