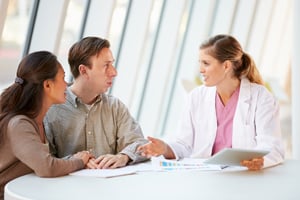 The pregnancy rate with IUI vs. intercourse in natural cycles is similar. Therefore, we will generally perform IUI along with fertility drugs (clomiphene citrate, letrozole or gonadotropins).

During intrauterine insemination, the semen sample is “washed” in a centrifuge so as to separate the sperm from the seminal plasma (which contains prostaglandins that can cause severe cramping). The motile sperm are then loaded in a tube (catheter) and deposited in the uterine cavity when the woman is ovulating.

Prior to IUI the total motile sperm count (TMSC) in the sample is usually estimated. Generally speaking, a post-wash TMSC greater than 10 million is considered optimal. The pregnancy rates with a TMSC are very low and these patients are generally considered unsuitable for IUI. But, is this really true?

They reviewed all stimulated clomiphene citrate, letrozole, and/or injectable gonadotropin IUI cycles performed from 2004 to 2014 were reviewed, excluding double insemination. 47,553 insemination cycles were available to evaluate the relationship between TMSC and clinical pregnancy (defined as ultrasound confirmation of an intrauterine gestational sac). Pregnancy rates were highest with a clear threshold noted at greater than 9 million TMSC. Pregnancy rates declined gradually as TMSC decreased (see Table).

The IUI pregnancy rates were optimized in patients with a TMSC greater than 9 million. There was a statistically significant decrease even within the range of 8 – 9.9 TMSC (p=0.024).

The authors concluded that IUI pregnancy is optimized with TMSC greater than or equal to 9 million, below which rates gradually decline. Although rare, pregnancies were achieved with TMSC <0.25 million.

Since the decline in pregnancy is gradual and continuous, there is no specific threshold above or below which IUI is futile. Rather, these more specific quantitative predictions can be used to provide personalized counseling and clinical decision making, and patients with TMSC greater than or equal to 9 million should be reassured regarding prognosis.

My comment on this paper is that it may be reasonable to pursue IUI as a first line treatment even in patients with mild male factor. This is so even when the TMSC is less than 10 million. Other factors that should be kept in mind include female age and tubal status. In couples when the female age is greater than 35 y; or with tubal disease, the pregnancy rates in male factor patients may be higher with in vitro fertilization (IVF) and intracytoplasmic sperm injection (ICSI).

To see a fertility specialist who will help you understand the complexities of IUI and other fertility issues, make an appointment at one of InVia Fertility’s four Chicagoland locations.

Getting Pregnant at 44: What Are the Chances and Options?