What are the causes of recurrent pregnancy loss? 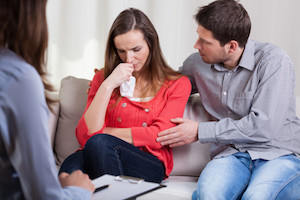 The Practice Committee of the American Society for Reproductive Medicine states that recurrent pregnancy loss (RPL) is a disease distinct from infertility, defined by two or more failed pregnancies. When the cause is unknown, each pregnancy loss merits careful review to determine whether specific evaluation may be appropriate. Although, after three or more losses, a thorough evaluation is warranted, the majority of fertility specialists will start testing after the second miscarriage. Although approximately 25% of all recognized pregnancies result in miscarriage, less than 5% of women will experience two consecutive miscarriages, and only 1% experience three or more.

What are the causes of RPL?

In more than half of the couples being tested, there will be no explanation for the RPL. The causes of RPL include:

A chromosome analysis performed from the parents’ blood identifies an inherited genetic cause in less than 5% of couples. Translocation (when part of one chromosome is attached to another chromosome) is the most common inherited chromosome abnormality. Although a parent who carries a translocation is frequently normal, their embryo may receive too much or too little genetic material. When this occurs, a miscarriage usually occurs. Couples with translocations or other specific chromosome defects may benefit from pre-implantation genetic diagnosis in conjunction with in vitro fertilization.

It is a common misconception that the majority of RPLs that occur in the first trimester are due to chromosomal defects. However, in a study of 420 products of conception from first-trimester pregnancy losses that had successful chromosomal evaluation (karyotype), 54% of the specimens were normal (euploid)! In women younger than 36 years of age with RPL, only 35% of the miscarriages were chromosomally abnormal (aneuploid), compared with 50% of miscarriages that were aneuploid in women with spontaneous miscarriage from the same age group.

If the products of conception from the first miscarriage are normal, the second miscarriage will be normal 70% of the time. Further, the frequency of a euploid karyotype significantly increases with the number of previous miscarriages.

The chance of a miscarriage increases as a woman ages. After age 40, more than one-third of all pregnancies end in miscarriage. Most of these embryos have an abnormal number of chromosomes.

Progesterone, a hormone produced by the ovary after ovulation, is necessary for a healthy pregnancy. There is controversy about whether low progesterone levels, often called 'luteal phase deficiency", may cause repeated miscarriages. Treatments may include ovulation induction, progesterone supplementation or injections of human chorionic gonadotropin (hCG), but there is no evidence to support the effectiveness of these treatments.

Poorly controlled diabetes increases the risk of miscarriage. Women with diabetes improve pregnancy outcomes if blood sugars are controlled before conception. Women who have insulin resistance, such as obese women and many who have polycystic ovarian syndrome (PCOS), also have higher rates of miscarriage. There is still not enough evidence to know if medications that improve insulin sensitivity lower miscarriage risks in women with PCOS.

Distortion of the uterine cavity may be found in approximately 10% to 15% of women with recurrent pregnancy losses. Diagnostic screening tests include hysterosalpingogram, sonohysterography, ultrasound, or hysteroscopy. Congenital uterine abnormalities include a double uterus, uterine septum, and a uterus in which only one side has formed. Asherman’s syndrome (scar tissue in the uterine cavity), uterine fibroids, and possibly uterine polyps are acquired abnormalities that may also cause recurrent miscarriages. Some of these conditions may be surgically corrected.

Blood tests for anticardiolipin antibodies and lupus anticoagulant may identify women with antiphospholipid syndrome, a cause for 3% to 15% of recurrent miscarriages. A second blood test performed at least 6 weeks later confirms the diagnosis. In women who have high levels of antiphospholipid antibodies, pregnancy outcomes are improved by the use of aspirin and heparin.

Inherited disorders that raise a woman's risk of serious blood clots (thrombosis) may also increase the risk of fetal death in the second half of pregnancy. However, there is no proven benefit for testing or treatment of women with thrombophilias and recurrent miscarriage in the first half of pregnancy.

Increasing evidence suggests that abnormal integrity (intactness) of sperm DNA may affect embryo development and possibly increase miscarriage risk. However, the currently available tests for testing sperm DNA integrity have not been shown to be useful in RPL patients.