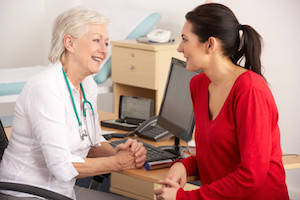 During in vitro fertilization (IVF) in order for implantation and pregnancy to occur, the embryos must reach a stage of development known as ‘blastocyst’. Reaching the blastocyst stage is an integral part of the development of an embryo.

But what does it mean if the embryo makes a blastocyst on day 5 versus day 6? Is this significant? Are day 5 blastocysts better than day 6 blastocysts?

The development of an embryo - shown in these pictures - is a time sensitive journey.

Day one after fertilization: an embryo is considered to be one-celled and is at the pronuclear stage, commonly referred to as 2PN.

Day two after fertilization,: the embryo is typically between two- to four-cells.

Day three after fertilization: the embryo has divided into six- to eight-cells. It is at this stage that the embryo begins to divide based on energy from the embryo instead of energy that was passed on in the egg.

Day four after fertilization: the embryo is at the morula stage, this is the stage just before the blastocyst stage. At this stage, cells begin to compact and form an amorphous mass, which is the very start of cellular differentiation that will occur at the blastocyst stage.

Day five and/or day six after fertilization: blastocyst formation should be occurring or have occurred. This means that there are three separate components of the embryo: The inner cell mass (ICM) which is the fetal component, the trophectoderm cells (the placental component) and the blastocoel cavity which is the fluid filled cavity that causes the blastocyst to expand and eventually hatch out of its zona pellucida (the shell).

Let's start by reviewing how blastocysts are graded:

NUMBER: The number refers to the degree of expansion of the embryo’s cavity and goes from 2-6

SECOND LETTER: the second letter refers to the trophectoderm quality.

So what is more important, the grade of the blastocyst or the day of blastocyst formation? 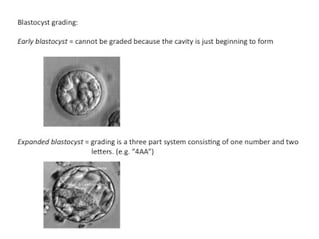 Several studies involving fresh blastocyst transfer have suggested that the rate of development to the blastocyst stage affects the pregnancy outcome of IVF treatment cycles. Studies on fresh IVF cycles have reported higher implantation and pregnancy rates with the transfer of blastocysts developing on Day 5 compared with those developing on Day 6, even though the grades were the same.

Does this mean that day 6 blastocysts are bad?

No. What it means is the blastocyst is not in sync with the uterine lining. For this reason, if there are no expanded blastocysts (expansion stage 2-4) on day 5, it is best to freeze any blastocysts that do develop on day 6 versus transferring them into the uterus on day 6. In this way, we can optimize the synchronization of the lining and the embryo in a future frozen embryo transfer. Studies have shown a low pregnancy rate (around 15% per transfer) when day-6 blastocysts are transferred. However, if they are frozen (cryopreserved) and transferred in a subsequent cycle, the pregnancy rates are once again excellent (around 50% per transfer).

Waiting can be tough when you want to get pregnant right away, but freezing any slow developing blastocysts optimizes the chance for future success.

To work knowledgable and experienced fertility team dedicated to helping you get pregnant, make an appointment at one of InVia’s four Chicago area fertility clinics.