Should You Have Endometrioma Surgery? 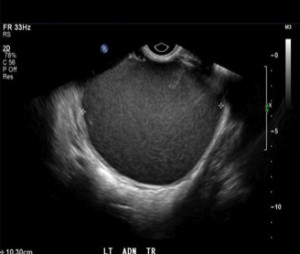 Endometriosis is a condition where the uterine lining (endometrium – shown at right via ultrasound) ) is present outside the uterine cavity. An endometrioma is a blood-filled "chocolate" cyst that can occur when endometriosis tissue develops in the ovary.
By definition, a patient with endometrioma has “severe” or Stage IV endometriosis. These patients can be severely symptomatic (painful periods that are getting progressively worse, pain with intercourse) and infertile.

The treatment of ovarian endometriomas remains controversial. Initial studies tried to demonstrate a link between endometriomas and infertility, and increased fertility after endometrioma surgery. With the development of in vitro fertilization (IVF), doubts were raised about the utility of surgery for fertility purposes in women with endometrioma. Some investigators even suggested that fertility may be reduced as a result of traumatic surgery, as it removes not only the endometrioma but also healthy ovarian cortex.

Should we perform surgery for endometriomas? Is there a best technique? Researchers from the Universite Catholoque de Louvain, Brussels, Belgium and the Nagasaki University School of Medicine, Nagasaki, Japan addressed these very questions (Jadoul et al. Fertil Steril 2012;98:556-63).

Arguments in Favor of Surgery for Endometrioma

Arguments Against Surgery for Endometrioma

So What Should We Do?

The authors opine that several facts should be considered before deciding to operate. These include the patient's age, her symptoms, whether she wants to conceive soon, previous surgery, other indications for IVF and endometrioma size.

In patients with no other infertility factor that wish to conceive soon, surgery may be indicated.

Repeat surgery is generally to be avoided and IVF may be the better option.

The authors also suggest that endometrioma larger than 3 cm should be removed before IVF.

Read more about endometrioma surgical techniques in this blog.

Use of Birth Control Pills In the IVF Process

Top 10 Facts about the Thyroid Gland and Female Reproduction