Is my infertility my fault? 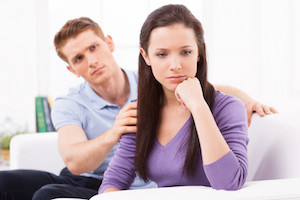 When I was in the midst of my despair after having lost 2 pregnancies, I began to wonder, “Is all of this my fault? Did I wait too long to try to have a family? Should I have settled down sooner?” And even worse, "Am I being punished for a past transgression? If so, does the punishment fit my crime?"

If you are torturing yourself in the same way I did, hear this, "None of this is your fault. You did nothing to deserve the hand that you have been dealt. I beg you to stop because nothing good will come out of the shoulda', woulda', coulda's!" (Yes, I am yelling at you right now. Get over it and keep reading.) Your struggle to have a family is absolutely, 100% not fair. Whether you have learned without a doubt that having your own biological child is not an option or you are in a state of Purgatory and don't fully understand what is standing in your way of having a healthy baby, it's NOT fair! (This is the part where I am wrapping my arms around you metaphorically. If you were standing in front of me, I would actually do so.) You have every right to feel angry, upset, sad, mad, disgusted, bewildered, and every other noun that fits here. Maybe you are upset with your partner for not understanding your immense grief? You may even be frustrated with your doctor for not being able to diagnose the reason(s) for your infertility. If you know that you are unable to have a biological child, you may be struggling to accept that you will not share a genetic link with your children. There are a myriad of reasons why you are experiencing these emotions. Your grief is real and it is valid. (Say that to yourself one more time because it is absolutely true.)

In fact, if you think it would help, you should hit, break and/or smash something. I threw and broke A LOT of meaningless objects when I was enduring this part of my despair and depression. Direct your physical destruction on material things though. Hitting humans is off limits and will only make you feel worse in the long run. If your partner comes home and notices something of value has been inexplicably broken, you can blame it on me. I can’t reimburse you for it though. I’m just sayin’! If smashing a few vases just isn’t going to get the job done, go out and buy an insanely expensive piece of jewelry, pair of shoes, or purse. I’m giving you permission and I want you to do something that makes you feel better, even if the relief is only temporary. Better yet, scream, yell and cry to someone who knows and loves you unconditionally. Let them throw their arms around you when the time is right. My guess is that they are looking for ways to support you and will welcome the opportunity. When I allowed my raw emotions to rise to the surface, I could sometimes manage a few syllables in between my sobs and gasps. Whatever I was able to say was pretty much indiscernible. Sometimes, you just need to let it out even if your loved ones can't understand a darn word you've just uttered. Once you’re done breaking things, maxing out your credit card, and screaming your lungs out, I want to share a few thoughts with you…

Now that I have crossed over from your place of grief, here is what I want you to know: All of my children were absolutely meant to be mine. The fact that we aren't linked genetically is a mere caveat. It is actually rather difficult for me to believe that they don't share my genetics and here is why…

My oldest son, who is adopted, is me, truly! Oddly enough, he looks like me. When I was a mischievous kid, this was the human my mother conjured up when she would say, “Oh, one day I hope you will have a child just like you!” Her wish was granted without a doubt. He enjoys organizing and cleaning at the age of 3.5 years old. He likes to load the dishwasher. After a bath, he drags the wet washcloth across the counter to make sure to get all of the germs off of it. The word “no” is one that he uses proficiently when it meets his needs though he refuses to acknowledge it if it is directed towards his actions. He has Strabismus (crossing of the eyes). I possessed the very same traits, qualities and conditions when I was his age--every single one of them. Honestly, at times, it kind of freaks me out. You already know that my DiDi identical twins came via an anonymous egg donor and that I am also an identical twin myself. Fraternal twins are linked genetically but identical twins are not because they are simply a result of one egg splitting. The incidence of identical twins occurring is 3 out of every 1,000 births Worldwide. The basic point that I am trying to make here is that it is a HUGE coincidence that I have identical twins especially since I am one too. My twins bear a close resemblance to my husband but they definitely have some of my features too. Now, I think that it is important to mention that the anonymous donor we chose does look an awful lot like me. In fact, that was one of the most important factors when we chose our egg donor.

When our twins were born, I was unable to breastfeed. I lost a great deal of blood and had 7 blood transfusions the night they were delivered. That life-threatening loss of blood prevented me from producing any breast milk whatsoever. I mention this because when they were in the NICU, I felt a tremendous amount of remorse about not being able to breastfeed them. Even without the breastfeeding, we bonded in so many other meaningful ways. They were in the NICU for 3 weeks. I was in the hospital myself for about half the time they were admitted. Once I was sent home, I went to the hospital every day to see and hold them. Like any other mother who is faced with caring for a child at home while her other little one(s) are in the NICU, I worried and fretted over my premature babies AND I felt the pangs of guilt when I was with one but not the others. Biology was irrelevant at this stage of the game--my deep love for my children had already taken over.

My overall conclusion is that the children who come to us are destined to be ours; the manner in which they arrive is immaterial. Once I became a mother, my anger and sadness were replaced with joy, love and worry for their health and well-being.

I wish you the same amount of love, joy & worry when you become a parent!